Well, J's Mom nailed it. I've been told I favor several different celebrities over the years... Danny Glover, Willem Dafoe, Jim Carrey, Jay Barker, but this one takes the cake. While they were watching TV the other night, she told J that I look like Steve-O. Well, I had never seen this guy. He is on the show "Wild Boys" on MTV. So last night we watched it, and I was freaking out! I was like, "Turn it! I can't watch this." 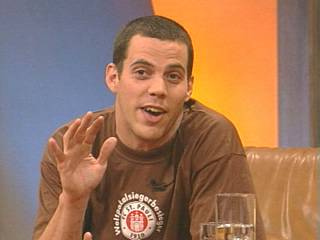 This is kinda freaky.

I look like Steve-O, Jerry! I look like Steve-O! Maybe it's just me. Maybe not as much now, but this is exactly how I looked about four or five years ago. For those of you who know me, I would be really interested in hearing your opinions on this matter. I'll try and post a similar pic of me if I can find one.

Email ThisBlogThis!Share to TwitterShare to FacebookShare to Pinterest
Labels: Steve-O