This could be you (if you weren't famous)

Sometimes I like to imagine celebrities are watching my life and thinking, "This would be me if I weren't famous."

After all, that's pretty much what this blog is -- a reality show in writing.  I remember back when we first began this, I did an interview with the local paper about blogging.  No, really, I did!  Why does no one ever believe me anymore when I tell that story?  I thought the girl who wrote the article might have had a crush on me.  Turns out it was more of a crush on my blog.

Anyhow, about the only quote I can remember from that interview seven years ago is, "It's kinda like having your own Nick & Jessica show.  Except it's just Nick."  (You may remember Newlyweds: Nick & Jessica?  Even though that's been about one thousand, two hundred and eighty-seven reality shows ago.)

I like to think reading about my life gives celebrities that little extra motivation they need to stay famous.  Take yesterday for example, I came home from work and dozed off while watching General Hospital.  Then I woke up and had two bowls of Cocoa Pebbles.

But that was nothing compared to today.  Today was a big day for me.

First, it's Gordon Lightfoot's birthday.  I don't have to tell you how big a fan I am of Gordon Lightfoot.  And have been ever since I discovered his music, way back a couple of years ago.  I celebrated by tweeting him a birthday message, even though I found no evidence whatsoever that he's even on Twitter.

Secondly, today is also Guinness World Records Day.  I don't have to tell you how badly I want to make it into the Guinness Book Of World Records.  Because I have already told you.  Several times.  It's one of my two main life goals.

To me, 95% of getting into the Guinness Book is finding the perfect record to break.  The rest is easy.  That's why I spend such an enormous amount of time pondering it.  I believe life is best lived in the mind.

As I was reading about the various world record attempts that would be going on around the globe, one in particular jumped out at me: The largest gathering of ABBA impersonators.

I didn't even know there were any ABBA impersonators!  They must be like the Swedish Elvis!

So I've spent the day sharing my ABBA love with friends, downloading some of their songs I didn't have, and searching (in vain) for a way to make that backwards B appear on the screen.

And lastly, completing the trifecta of my big day, I downloaded a new app for my Blackberry.  I kept hearing all about this game Angry Birds, therefore I decided I would see what all the fuss was about.  Except apparently Angry Birds isn't available for the Torch, at least not that I could find.  So instead, I get to play a game called Angry Farm. It's similar to Angry Birds, but... not quite.

It's kinda like when you were a kid and you wanted a Barbie, but your parents said they couldn't afford one, so you got a Cindy doll instead, for like $1.99.  Then when the other kids came over and brought their Barbies, they looked at your doll and were like, "Who is that?"  Hypothetically, I mean.

Now, imagine with me if you will... Somewhere in sun-drenched Celebrityville tomorrow, in between filming another episode of Law & Order: Special Victims Unit and the new season of Ice Loves Coco, Ice-T will take a break to check his Google reader on his iPad and see that I've posted a new blog entry.

As he reads about my life, he can only shudder and shake his head while thinking, "If I weren't famous, this.... this would be me."  Look closer and you'll see Ice's newest ink is a tatt of my blog URL, underneath the words "Stay Famous."

Later in the day, he'll curse me a little when he realizes he's got "Dancing Queen" stuck in his head.

In an uncertain world, isn't it comforting to know there are certain inalienable truths about guys you can always count on?

For example, we prefer long hair.  (That doesn't mean we hate your short hair, it just means we like long hair better.)  We despise asking anyone for directions and consider getting lost a much more attractive option.  We forget things.  (Or sometimes just don't pay attention when we're told the thing in the first place.  Same diff.)  And we are unable to bear children.

But regarding the latter, I tell you this, friends: I came as close as any of my uterus-challenged counterparts ever has this past weekend.

I'm referring, of course, to the Alabama-LSU game.  #1 versus #2.  The so-called Game of the Century.

I've written before to some length as to the near-constant state of anxiety and stress I'm under while watching a Bama game.  But never had I heard it put so perfectly until discussing the game with a friend last week, when she said, "This game will be like birthing a child for you."

Yes!  Finally, someone who gets me.  That's it exactly.  And before anyone gets offended by me comparing childbirth to a football game, let's remember -- this is Alabama.  Also, the comment came from a girl who has a child.  So, I think she would know.  And I have email documentation.  So I will not allow these "birther" questions to derail my campaign for comedy.

I'd say the contractions probably started sometime on Thursday.  When the big day arrived on Saturday, I was beyond nervous, as I'm sure any woman in my situation would be.  I had chosen to do a home birth at LJ's with he and Wolfgang serving as my trusted, if primitive, midwives.  I also decided not to use any sedatives or other medication during the procedure.  That may have been a serious mistake.

As for the labor itself, it was even more painful than I expected.  Four hours of yelling, banging, whining, and possibly a little cursing.  Just before halftime, Wolfgang's wife took her two daughters and went home.  (What?  Was it something I said/threw/yelled?)  Take that as a lesson.  Childbirth is no place for women and children.  The irony of which doesn't escape me.

In the end, imagine my horror as a baby resembling Les Miles emerged wearing a god-awful white LSU cap, and I realized Nick Saban was not the father.  For days I lay listless.  Unfeeling.  In a haze.  Only now am I able to speak of it.

If all that wasn't enough, I gained a pound over the weekend.  Don't you just hate those guys who have kids and never gain an ounce?  Hussies!

And now I'm reading there's a slight chance there could be a rematch?!  Oy.  My now-hollow insides are hurting just thinking about it.  I don't know if I can handle a second one.

I may have to take a Lamaze class.  Or do some Kegels.

The prodigal blogger has returned.  He who was lost hath been restored to the ninety and nine.  So if you happen to be a shepherd, you should probably be rejoicing about now.  And if you're a father who has a son in his late thirties who's been missing for a few weeks, then by all means make a feast and kiss me.  On second thought, the feast will do just fine.

I sorely miss writing.  And hope to return to it on a much more frequent basis soon.  In the meantime, I have pictures!

October afforded me one more trip to the beach, where I kissed summer good-bye.  At least, I think that was her name. 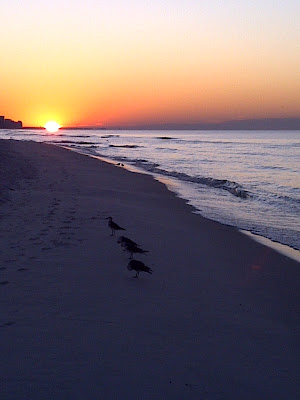 Then this past weekend, we ventured over to the Little River Canyon area in northeast Alabama.  There we visited Little River Falls: 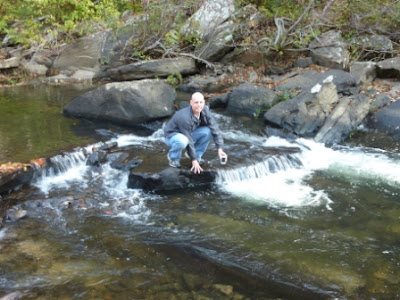 The above picture is not Little River Falls.  Had it been, I probably would have been more than a bit disappointed after making that trek.  Also, if you look closely, I'm holding a cell phone in my hand as a point of reference, lest you think me a Philistine.

Fortunately, we did manage to locate Little River Falls a bit later.  I decided not to get as close to the edge of this one: 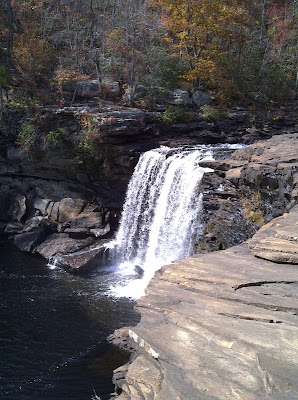 The afternoon consisted of lots of driving and a bit of hiking.  The trees, near the height of their autumn brilliance, combined with the waterfalls and sheer drops of the cliff walls provided a perfect backdrop for both.  Even though quite a few people were out, there were a couple of times when I could hear nothing but the rushing of the river below.  Absolute peace.

There was one sign which dubbed the area the Grand Canyon of the South.  And to think I'd never been there before, even though it's only a couple hours away.  Sometimes I think we tend to overlook the tourist attractions nearest to us.

I was hopeful of happening upon the remains of an old, abandoned theme park I'd read about which resided in the area many years ago, called Canyon Land.  You know my fascination with defunct theme parks.  It's even greater than my fascination with defunct relationships.  Unfortunately, Google can only get you so far -- in either endeavor --and I was unable to find it.  If I can get a bit more information on its exact location, it would definitely be worth another trip someday.

For now, it's just good to be back in the fold.