When anon I realized I hath not blogged in a span of nearly twain fortnights, I didst recall yon erstwhile days wherein my nimble fingers wouldest blog daily.  Erelong didst I question why I had just useth "fortnight" to describeth time.  But in nowise finding any answer, and whereby I am unable or unwilling to continue in my present manner of writing, do I ashamedly present the following scantily clad entry.

The election has come to an end.  The Electoral College has spoken.  I call for all Americans to now come together and enjoy a few weeks with no political ads, because one thing's for certain: Campaigning for 2016 will begin all too soon, if it hasn't already.

In case you somehow managed to miss the election results, allow me to fill you in.  We here in Boneville USA voted for the status quo.  That is, to remain a "dry" municipality.  (Do people in the rest of the country even know what a dry city/county is?)

But all is not lost.  For my state is one of several to have a petition started for us to secede from the Union.  That's right, ye Scallywags, tonight we're gonna party like it's 1861!

Oy.  That really is the facepalm of all facepalms.

But ere ye think we've all gone mad down here and have Sean Hannity piped into our homes 24/7 (was that redundant?), there comes this bit of news: Nick Saban received dozens of write-in votes for President in the state of Alabama.  (I said "in" not "of.")  Twenty-two votes in one county alone.  And suddenly everything is set back in order.

His wife even received a write-in vote for circuit clerk in one county.  And no, it wasn't my county.  Although I can't promise it won't be next time.  Let us raise a toast... Uh... on second thought, it's like a seven-minute drive to the nearest beer store.  So scratch that.  We'll have to settle for a virtual fistbump.  *makes explosion sound with mouth*

Speaking of football, I am sure some of you were concerned about me following Bama's first loss of the season.  Let me just say that your concern is appreciated, and very much warranted.  The past three weeks have been an emotional seesaw.

After the LSU game, I was on a three-day high.  Or what I imagine a high to be.  I've never really been high, at least not in the drug-induced-brain-altering sense.  Once I got a splitting headache from being around a guy who had obviously been smoking pot, but I don't think that counts.  Anyway, had you tested the levels of dopamine in my brain following that game, I would surely have been stripped of all my Tour de France titles on the spot, assuming I had won any, or owned a bike whose tires were not perpetually both flat.

It seems almost not possible that the football season has passed so quickly.  I guess time flies when you're in a near-constant state of anxiety interspersed with brief moments of relief.

And if ever I need to get away from the stress of it all, an afternoon walk with Nephew Bone does the trick. 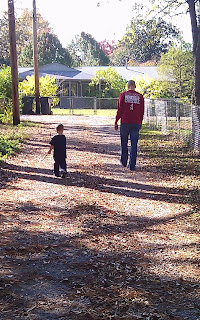 As autumn wanes, we talk about things like why Uncle Bone can't crack just one pecan by itself, where does this road go, the importance of finding just the right stick, and "Ooo, look!  A helicopter!"  You know, the important stuff.

These moments are among my favorite.

I wish you all a wonderful Thanksgiving.  And on that note, I'll leave you with four-and-a-half minutes of not-entirely-politically-correct classic sitcom gold.