As much as I have considered granting unrequested permission to TruTV to feature my life on the first-ever blogger reality show (to be aired right after Forensic Files, of course), even I must admit there are issues to consider.

First off, is there enough interesting material in my life to even fill an hour a week? Secondly, I'd most likely have to wear pants around the house. Then of course, there would be the inevitable invite to be on Dancing With The Stars, where I would probably go out early like Kenny Mayne and the man from Apple because my mom can't see Russia from her house and I was never married to Jon Gosselin. Lastly -- and this is where today's post comes in -- every embarrassing moment of my life would be chronicled for all the world to see.

A little background, if you will:

During football season, if I'm not at the Bama game, I'm watching on TV. And I have a circle of friends with whom I am constantly texting throughout the game, sometimes after every play. I like to think of them as my mobile entourage. There's Axl, my sister, Wolfgang, and the female component of Kywana.

That brings us to earlier this week. I got a call from a number that's not programmed into my phone. Now, I don't usually answer calls from numbers I don't recognize, but I guess I was feeling uncommonly sociable on this particular day.

What follows is a never-before-published recap of that conversation, with my thoughts in italics, included for your enjoyment.

"Hi, this is (name withheld) from AT&T. We noticed you had gone over your allotted number of text messages last month."

"Looking at your account, you actually would save money if you upgraded your data plan."

Looking at my account? Shouldn't that be illegal? Stupid Patriot Act.

"You currently get 1500 texts per month. You used over 1800 last month, which came out to about 12 dollars in overage charges."

You oughta be thanking me for using that many texts. Ever hear of frequent flier miles? I should be rewarded! There should be an 1800 Club for people like me. Or... at least a Texters Anonymous.

"If you were to go to the next highest plan, it would be 10 dollars more, but you would get unlimited texts."

(Pause for response. There is none.)

"So if you think you're going to be texting a lot every month, then that's something you might want to consider."

'Bout a ghost from a wishing well

It happened one night near summer's end. We were driving across some state somewhere. I don't remember where we had been or where we were going, which by the way is a pretty good rule of thumb for my entire life. I had been making good, some might say excessive, use of the seek button, and had settled for a moment on a station that was playing some older, classic-type country music.

A song came on that I didn't recognize, but couldn't turn away from. It was one of those songs you always seem to hear at night while driving and you wish it wouldn't end. I listened intently to the haunting lyrics and rich baritone, thinking I would eventually recognize the voice, but never did. So I made a mental note of a couple of lines intending to Google the lyrics later, but never did.

Fast forward to about a month ago. I was lying on the couch watching TV late one night, fighting sleep as I often do on weekends because sleep means Monday is one day closer. Around 1 or 2 in the morning I stopped on this infomercial for some songs of the seventies collection, hosted by two guys from that group that sang "A Horse With No Name."

To be honest, I'd always considered the seventies one of the weaker decades musically. But they were advertising some pretty good stuff -- Jim Croce, James Taylor, Paul Simon. I was proud of myself. I didn't call nor go online to order the entire collection. I like to think that shows maturity.

Then Sweet-Sister-Golden-Hair-Surprise they played it! The song I'd heard while traversing the countryside one night all those weeks ago. It was called, "If You Could Read My Mind."

And that's the story of how I discovered Gordon Lightfoot at 71.

My microwave, the one I've had since the day I left home, is gone. Well that's not entirely true. It's still sitting on the counter, but like a girlfriend you've insulted one too many times, it's no longer putting out.

It happened Monday before last. I was six minutes into an eight-to-ten minute baked potato when I stopped it for a routine check. When I tried to start it back up, there was nothing. I unplugged it and plugged it back in, you know because sometimes that works with the computer and computers and microwaves are so similar... still nothing. It was over.

What can one say about a countertop appliance? I knew her ding, the layout of her face, and what made her go around. Well, not mechanically speaking, but I knew which buttons to push.

With a capacity of 0.8 cubic feet, rounding up, she was 700 watts of relatively-safe radiation heating power. You can't get kind of power anymore! Seriously, do they still make them with that low of wattage?

And let me say this, if there were a Guinness Book Of World Records record for such a thing -- and if I had kept an accurate count -- I have no doubt we would have set a record for most frozen burritos made in a single non-commercial microwave oven that would never have been broken.

Perhaps most tragically, she had just recently undergone her 10-year cleaning. Granted, a few years late.

There is much I will miss about her. No more quick baked potatoes. No more easy Rotel dip. No more microwave popcorn for supper. No longer any such thing as warm leftovers. But you know what I have found I miss the most? The clock.

I don't have a DVR (and you can't see the stove, you know, for the wall) so the microwave was the only easily-viewable clock from my living room. Not a day has passed that I haven't looked in her direction to check the time, each glance a harsh reminder of what once was.

So for the past ten days, I have been struggling to survive my newfound, unintentionally Amish existence. I warmed up some queso dip in a saucepan last night. A saucepan, people. What is this, 1940?

And by the way, microwave popcorn on a stove? That doesn't work. It just burns the bag.

How 'bout getting off of these antibiotics

The week started out well enough. It was Bone's first-ever attempt at an Halloween party. Though there was some pause given on whether to have the fiesta on Saturday or Sunday night, as Halloween fell on Sunday and I don't know how it is where you're from but in Alabama Sunday night is church night. As is Wednesday night. So towns, cities and churches debated on whether to declare Saturday the official night for tricks and treats. With no clear consensus reached, confusion reigned.

Fortunately, I thrive on confusion. OK, maybe not, but it sounded like a good thing to say there.

So the party was set for Saturday night and up until Saturday Noon looked like it would be about as well attended as a Dick Cheney hunting seminar. Then I guess no one could find anything else better to do -- which in itself is just beyond pathetic -- and we wound up with several late commits and a party of twelve.

There was pumpkin carving, pumpkin cupcakes -- which I did not sample, blech -- and the newest Halloween tradition of them all, a few games of Spoons. I don't know how familiar you are with the rules of Spoons, but my goal is to be in the final two, NOT get the four-of-a-kind, yet still manage to grab the spoon first. I mean, that would by far be the ultimate amongst all my relatively useless competitive accomplishments. I will retire from Spoons when that happens. And possibly do the late-night talk show circuit.

Perhaps the highlight of the evening was the costume contest. There was an adult costume contest, which wasn't as fun as it initially sounds, and a children's contest. Dressing up for Halloween for the first time in over twenty years, I managed to win the adult contest, barely outdistancing Lil Bootay 3 votes to 2, which was even odder ("even odder?") considering she wasn't wearing a costume.

So the party was a qualified (and inexplicable) success. Then things began to go downhill.

I got a sore throat Monday night. Normally I'm over anything in a day, two max. But things kept getting worse. I went to the doctor Thursday, but instead of antibiotics, he gave me some sore throat mouthwash, which didn't really help my sore throat but did function somewhat well as a weight loss pill as it soon brought my vomitless streak to an end.

I started running a fever Thursday night, which for some reason always makes me think of the time on Little House On The Prairie that Albert had a fever and they put him in a tub of ice. Or was it Almanzo? And why do I always think of that? It's not like I could ever actually do it. I can't even stand a cold shower.

Also -- and I don't think I've ever noticed this before -- but it's possible I'm a bit of a whiner when I'm sick. This occurred to me sometime amidst the three days of lying around randomly making groaning noises and occasionally moaning things like "I'm dying" and "Why me, Lord?"

Hard to believe any week that began like this could actually go downhill: 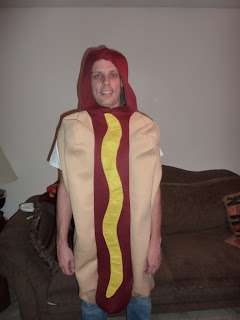 But alas, things are finally looking up. I went to the walk-in clinic today (you just cannot make that sound classy) and took two shots in the buttocks (that either). On a positive note, they were administered by a female.

So I've got some antibiotics. I have something else in common with Forrest Gump (besides hailing from Alabama). And best of all, McRib is back! Who wouldn't wanna be me?