How will you spend eternity?

I didn't mean to scare you.  I just wanted to check in, really.  Make sure you know I'm still here.  That I'm not going on another one of my Tony Geary-esque three month hiatuses.  Side jobs got a little busy this week.  Plus, I'm poeming once a day for National Poetry Month.  It really is true what they say, a poem a day keeps other blogs posts away.

Also, I continue to name my future children.  (I'm really gonna have to get on the ball to get all this begatting done.)  My latest adventure in nomenclature has yielded yet another gem.  Are you ready for it?

Picture, if you will, a dad and daughter walking hand in calloused hand through an overgrown meadow.  OK, so it's more of a yard that the dad hasn't mowed in four days, but it looks like it's been three weeks.  That's because the dad put out some Miracle-Gro a couple of times to try and save a fledgling tree, never once considering it would cause the grass to grow like the ever-loving national debt.

Anyway, back to our story.  The daughter pauses to ask one of those age-old questions that kids ask sometimes.

Now that could have been a stumper.  But little does she know he's been waiting for this moment for years.  He looks down into those trusting eyes, pulls out his phone, swipes it from camera to video so that he can Facebook this immediately afterward, and responds with four words he's practiced and perfected.

Sigh.  Raising my future children is so rewarding.  Will be, I mean.

I thought I'd close today with a short poem from my NaPoWriMo collection, a little cross-pollination if you will.  Also, ideally, this will help explain where the title of my post came from.


Beyond the blue
If I make it somehow
That first day

While everyone else
Is in a scurry to
See the Savior

I'll search out
He who built the ark
To discuss mosquitoes

A Confession over Coffee

I don't know where I was that day.  Maybe I was hanging out by the immaturity booth trying to get an extra dose.  Perhaps some fig-leaf-clad hottie was distracting me with her forbidden fruit.  Whatever it was, this much is certain:  I was nowhere to be found when they were handing out coffee-making ability.

Let's delve into a little of my history with the wakey juice.  It's probably important to start by mentioning that at one point I thought you poured the water directly into the filter.

And then I turned thirty-four.

Far too often, (read: almost always) me attempting to make coffee somehow winds up with grounds in the coffee.  And not like one or two grounds.  We're talking a multitude of grounds.  The best part of waking up is... well it's definitely not that.  Logically, I know the grounds are not supposed to drip into the pot, but I don't know how to stop it from happening.

At work, since I'm the first one to arrive every morning, the secretary used to get the coffee pot ready to go before she left in the evening.  Then all I had to do was plug it in when I got there in the morning.  Fortunately, even I couldn't screw that up.

Unfortunately, she quit in December.  So now we don't have coffee in the morning until someone besides me gets to work.

I even called the publishers of the "...for Dummies" series.  "I'm sorry, sir.  There is no 'Coffee for Dummies' book.  There's just no demand for one."

"Oh yeah?  Well there's no demand for your mother!" (I didn't really say that.  Curse my non-confrontational, Maxwell-House-challenged self!)

In my very frail defense, I haven't tried to make it that many times.  Only twice in the last two years.  Last year, I even texted a friend and asked for careful step-by-step instructions.  She texted back exactly how much water to add, how much coffee, and.... well that's pretty much it, I guess.

I'm not sure what happened. (This is a common theme with me and coffee.)  Coffee was leaking out of the top of the maker.  There were grounds running down the side of the pot and onto the counter.  I was pretty sure the whole thing might explode at any second.  I thought maybe the coffee maker was broken.

Fast forward to this past Sunday.  The urge struck me again.  I, foolishly, felt confident.  I'm a grown man, theoretically.  There is no way I can continue screwing this up.  Even the worst barista lucks into a perfect cup now and again, right?  So I hopped back up on that deceptively complicated horse.

After about ten minutes, there were only a couple of drops in the bottom of the pot.  Intuitively sensing something was wrong, I opened the top to find the water was in the filter -- which is not where I put it, by the way, this time -- and on the verge of overflowing!  What in the world is going on with my life!?!?!?


Eventually, I found that if I pushed down harder on the top of the coffee maker, the coffee would come out.  Albeit that meant grounds and all by this point.  Naturally.

But something had clicked.  I mean, literally.  The top of the coffee maker had clicked when I pressed down on it.  That must be the key.  So I decided to give it one more chance.  Yes, I'm giving the coffee one more opportunity to behave as it should, because clearly it is the coffee that is underperforming and not me.  I cleaned out the pot -- I'm sorry, the "carafe."  Perhaps if I speak like a barista, I'll become one.

I pushed down.  I heard the click.  (These may be my two most phenomenal sentences ever.)

Wait....what's that?  Could it be?  Yes, yes, I believe it is!  I'm making coffee.  It's coming out!!!  (That's what she said.)  And the best part of all?  There didn't appear to be any grounds in it. My great-great-great-great-uncle Bone Valdez, if there is such a man, would be so proud.

I poured myself a cup, with just a bit of milk, and 3-4 heaping teaspoons of sugar, of course.  I felt accomplished.  So this is what making coffee is like for everyone else in the world.

And then, I tasted it.

Ah well, at least my "pistons and valves" should be good to go for another three months or three thousand miles.

Email ThisBlogThis!Share to TwitterShare to FacebookShare to Pinterest
Labels: coffee, Coffee for Dummies 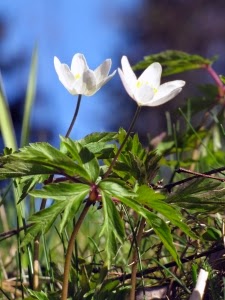 Us two
Fighting, at first
For the same ground
To escape the other's shadow
Then maturing
Content in our own petals
Yet forever sharing

April is National Poetry Month.  I am going to attempt to poem each day at my Poetry Wrecks site, home for wayward lyrics and disadvantaged poetry.  If I like any of them, I may cross post here, as I have done with this one.  For this, I was given an image of two flowers and challenged to write a 55-word free verse poem.
Posted by Bone at 4/01/2015 09:47:00 AM 10 comments: