It's a beautiful evening here as I sit on the back porch writing.  Twilight is setting in.  The clouds are a mix of pink and and purple and a weird blue-gray.  The moon is out -- a waxing gibbous, I think it's called.  Looks like it'll be full in a few days.  It's a painting.  God doing his best Bob Ross.  Or maybe God let Bob paint this one...

I don't know what it is about Father's Day that makes me think about my dad.  Just one of life's little mysteries, I suppose.

Saturday, the plan was to meet Dad and his wife and go to supper and to the cemetery where his parents are buried.  (I've written about the cemetery here.)   Dad wanted to meet at 3:30.  It's about a 45-minute-to-an-hour drive to the cemetery.  So I'm thinking we'll get there at 4:30, leave the cemetery around 5ish, and be at the restaurant by 5:15 or so.  I know they like to eat super early, so that seemed like a good compromise.

I cannot adequately describe the moment of surprise and just wanting to burst out laughing out loud as Dad blew past the exit to the cemetery and I realized, "Oh, my dear Heavenly Father, we are about to eat supper at 4:15 in the afternoon."

But that's exactly what happened.

As we were ordering our drinks, my step-mom got water and whispered, "I didn't figure I oughta have any caffeine this late in the day."  Meanwhile, I was looking much forward to my sweet tea and thinking, "I'll be doing great if this is the last caffeine I have today!"

After force-feeding myself a rather delicious meal of a cheeseburger, chili dog, (What?  They're really small!  Everybody gets multiples!) and banana pudding for dessert, we left for the cemetery.

Dad took a different way -- an old way -- and showed us the house where he grew up.  As we continued on the drive, I asked where his high school was, and he started peering off the road to the right.  He said, "You can probably see it behind these new buildings."  The buildings turned out to be the new school. He didn't realize they had built one.  And though I'm sure it didn't bother him, I felt bad for him in that instant.

Later, he took us clear across town to the cemetery where his two half-brothers are buried.  They weren't buried near each other and they obviously weren't buried by their parents.  I wondered why.  Dad didn't seem to know.

At some point as we walked amongst the peaceful rows of markers and flowers Dad mentioned that he and his wife had already purchased their spaces at a cemetery near where they live now.  It's not something I wanted to think or talk about, so I left his words to linger and fade without a response.  At the same time, I marveled at how he spoke of his own mortality with such matter-of-factness.

I think Dad is in a really good place these days.  There's an ease in him now that wasn't always there.  A contentment.  He seems to have found the answers to some of life's many questions.  It gives me hope that I, who take after him in so many other ways, will do the same.

He's all over Facebook now.  He mentioned it on at least six separate occasions during our excursion Saturday.  And when I called to see if he wanted to do this for Father's Day, he was at the gym.

We leave each other with a hug instead of a handshake anymore.  And the "I love yous" are no longer just implied.

But not everything has changed. He's still playing the guitar, still working, still driving the same old Chevy truck, which seems to always be barely running.  He's still in church every Sunday morning and night.  And he remains quite taken with his role as a grandpa.  "Peepaw," Nephew Bone calls him.  Some might say it's the role he was born to play.

Me, I always kinda thought he made a pretty good dad. 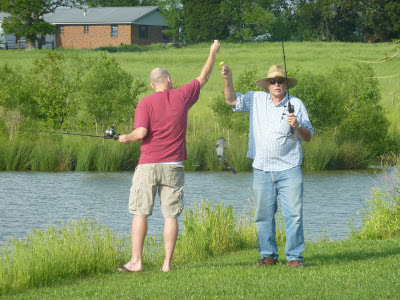 What people really mean when they type "LOL"

Well, I've done it.  I have created the definitive "definition of all LOL's" pie chart of our time.  And it only took me about four hours.

Listen to these reviews... that I just made up:

TextSavvy agrees: "We've looked for years for something like this, but everything that was out there was so lame.  This is only kind of lame."

Windows 3.1 For Dummies says, "Exquisite use of Paintbrush.  It's pretty clear from this the world will never need any other graphics/art software program ever!"

I'm not one to brag, but this may be my second-best pie chart ever.  Ideally, it would have a title, but whatever, you already know what it's about, so... enjoy!

Something has been weighing on my mind for some time, yet I have refrained from writing about it until now because, well quite frankly, I was afraid I would be persecuted for my beliefs.

And that thing is, the Big Bang Theory.

I know for a fact that some of you subscribe to the BBT, and are likely already planning your rebuttals for the comments section.  I have only one question for you people:  What have you been smoking?  And would you be able to ship some of that legally to me here in Alabama?  OK, so two questions.

My feelings on the Big Bang Theory can be summed up in two sentences: I don't believe it... is funny.  And I'm not buying it... as the #1 sitcom on television.

To be fair, I don't laugh at many shows.  Cheers and Seinfeld, obviously.  The Office, years 1 through 6 AC (Anno Carelli, loosely translated "in the year of our Michael Scott").  As far as current shows, New Girl makes me laugh.  There are a couple others.  But even if I don't laugh at a sitcom, I can usually find it mildly amusing, or at least see why some people would.

But when I watch the Big Bang Theory, I just sit there, mouth agape, eyes slightly squinted.  It's exactly the same look I had on the first day of Calculus.  I'm waiting, hoping for something, anything, to click.  But nothing ever does.

It seems like such a one-trick pony to me.  Sheldon is a nerd.  He's socially stunted.  I get it.  Only I find him entirely unfunny and, to be honest, quite annoying.  Oh, and Penny is the (air quotes alert) "normal" girl.  What an ingenious and original concept. Hey, 1965 called.  Marilyn Munster wants her gig back.

Now granted, the little Roseanne reunion they've got going on is nice, with Darlene and David, and Aunt Jackie.  Get back to me when they bring the original Becky on and we'll talk.

OK, so I don't like the show.  So what?  Not every show is for everybody.  There are two hundred plus channels on this newfangled cable, so I'll just watch something else and let it go.

I'll tell you why.  Because I'm me.  Because I can't let anything go.  Because if dead-horse-beating were an Olympic sport, I would be the Michael Phelps of it (without the proud mom or the marijuana scandal).  And because it bugs me to no end that I -- who has and still occasionally do consider comedian to be one of 30 to 40 possible career options when I grow up -- find virtually no humor in a show everyone else seems to love.  (Emphasis on "no end," as well as the implications that I've yet to grow up or choose a career.)

Imagine if you thought you might want to be.... I don't know... a singer when you grew up.  But you couldn't stand One Direction's music.  OK, bad example, everybody likes One Direction.  What about this?  You wanted to be a TMZ reporter, but you don't find anything interesting or unusual about Miley Cyrus, Amanda Bynes, or bikini pictures of anyone named Kardashian.  Can you imagine how horrible that would be???  Well, welcome to the comedic impasse known as my life.  At this rate, I may never find a career.

You know, I wouldn't even say anything if it were like the number fourteen show on television.  But CBS has to shove down my throat at every opportunity that it's number ONE!  Which in itself is annoying.

When you're number one, you don't flaunt it.  Fans of the #1 team in sports don't wear foam fingers proclaiming they're #1.  They're too busy out celebrating another championship, setting cars on fire and getting pepper-sprayed.  It's those delusional fans of the teams that are nowhere near the top that usually wear the foam fingers.

Besides, you can twist numbers to say anything you want.  For example, let's say on average 15 million people watch BBT each week.  Sounds like a lot, doesn't it?   Until you consider there are more than 300 trillion people in the United States... what?  Oh, million, 300 million.  Which means two hundred and... uh ..... a WHOLE LOT of us don't find your little nerd show funny.  So who's twisting numbers now?  Huh? Huh?  Huh?  Mmhmm, mmhmm, mmhmm.

Please understand, it's not that I have anything against nerds.  OK, maybe their perceived lack of hygiene.  But otherwise, I'm pro-nerd.  To wit, Kip was one of my four favorite characters on Napoleon Dynamite.  Nerds is one of my top twenty favorite candies.  And The It Crowd -- also about nerds -- is my favorite Netflix discovery in the history of Netflix discoveries.

In fact, I was so devastated when I had watched all the episodes of The IT Crowd that I didn't watch Netflix for days.  My Netflix obsession was dead.  Buried.  Fortunately, on the third day, it was resurrected when I bore witness to an Audrey Hepburn movie I had not seen before.

I came across one article titled "Eleven Reasons Geeks Hate The Big Bang Theory," which I did not find really applied to me.

Then I discovered someone who was using the power of the YouTube pulpit to spread their message.  They had posted a video of a scene from the Big Bang Theory with the laugh track removed.  I think the point was to prove how unfunny the scene was without the subliminal "you're supposed to laugh at this" message.  To which I gave a hearty "Amen!"

(At that point, I got sidetracked looking up stuff on how people react to a show when there is canned laughter versus when there is none, and lost about 30 minutes.)

Finally, I found an article written by a guy who sounded similar to me.  It bugged him because he didn't find the BBT funny but some of his friends did.  As I continued reading the TV-gospel-according-to-this-guy, he also spoke of a sitcom not of this present country -- the IT Crowd! Like me, he subscribes to the Intelligent Design of The IT Crowd over the Big Bang Theory.  Finally, I had found my TV-viewing messiah!

I suppose this debate will rage on (in my mind), possibly forever, or at least until the show is canceled and America writes me a big note of a apology -- preferably framed and in calligraphy -- saying, "What were we thinking!?"

Meanwhile, I will continue to search for validation for my beliefs.  Don't think me poor, or deserted, or lonely.  For I am just a pilgrim, in search of a sitcom, a network free of reality shows, where there is no more canned laughter.  And there shall be no night there... with bad TV.  And they shall need no Hulu, neither subscription to Netflix.  For the utter hilarity of the shows giveth them entertainment.  And they shall dwell on the couches in their houses forever.

Join me next week when I may or may not reveal my Theory of the Evolution of How I Met Your Mother, but most likely won't.