How NOT To Slide Into Second Base

"Jimmy's got some new moves. Watch Jimmy break up the double play. Ooooooh!! Jimmy's down! Jimmy might have a compound fracture. Jimmy's going into shock." 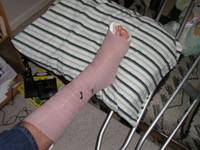 Well, that's a picture of my left foot. I injured it rather severely last night during the softball game. I was sliding into second base trying to break up a double play (which I accomplished...lol) and just jammed my foot right into the base. I knew it was bad when it happened. I rolled over and sat there a couple of seconds, but not wanting to cause a scene, I limped back to the dugout. That was only the first out of the inning so I decided to go outside the fence and try to walk it off, fully intending to go back out to left field in the bottom of the inning. It wasn't getting any better and when I reached down and pulled my sock away to look at it, well, it was quite gross. It was really bad swollen, worse than I have ever seen. It was like the size of a canteloupe. So I went back to the dugout and took off my shoe. Dwayne saw my ankle and was like, "Oh man, we gotta get you some ice." So I put some ice on it, but everyone was insisting that I go to the hospital. I finally relented. I figured my ankle really shouldn't be bigger than my knee, right? Luckily, Mom had come to watch the game so she and Rob's wife helped me to the car. They were thinking it was broken for sure so they didn't want me putting any pressure on it. The funny thing is, they are both like 5 feet tall, but that was sweet of them to help.

Anyway, we got to the emergency room and the ER nurse said it looked like it was broken to her. They took some X-rays and put a splint on it, put me on crutches, gave me a prescription for some Lortabs (!!!!) and sent me on my way. I have an appointment to see an orthopedic surgeon in the morning at 8:15. I spent the night with Mom last night, with no internet access. Obviously that has been the worst part of all. I went into work today for about an hour and a half, but will probably take the next couple of days off anyway. I cannot drive my truck because it's a stick shift, and I can't press the clutch with my left foot, so that is a big inconvenience. I really wanted a picture of it before they wrapped it, because it was really cool and gross. lol But alas, no one had their camera.

I just hated to leave the team, you know. I mean, we had 11 guys there, but I hated not to finish the game, and even worse, the season. I'm hoping it can heal and I can come back and play before the end of the season. We were winning 5-3 when I left, but I found out we ended up losing 14-7 :-( I was having one of my better games, too. Oh, I passed Jack Cook on my way out to the car, and he was like, "I think it's about time for us to retire." lol You just don't know how bad I hate to miss games. Oh well.

I just wanted to post a quick entry here to let everyone know what was going on. I am sure if I did not blog for more than a day or so, someone would get worried. I'm not sure what that says about my life, but.... Thanks to Mom, my sister, and Jessica for a bunch of help. Since I'm pretty much laid up now for awhile, it sure is nice to be taken care of. I think a guy could get used to this ;-) Hopefully, my next entry will be funnier. I think I hear a Lortab calling my name...