I had two hours sleep last night, so as Prince might say, forgive me if this goes astray.

Matt, Michael, Danielle, and I ventured down to Kinlock Falls this afternoon. It is located out in the Bankhead National Forest. Here are a few pics.

A picture of the falls. Sliding down is fun! 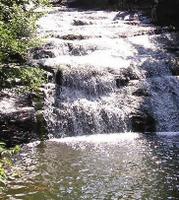 At the top of the falls, looking over the edge. The rock in the top center is the highest one I will jump off of :-) 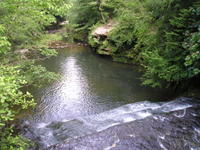 A little farther back upstream, still looking towards the falls: 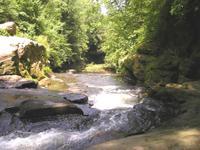 Looking upstream at the creek which feeds the falls: 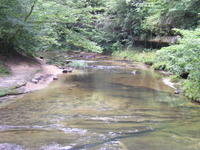 It was a million miles of fun. When we got there, we were the only ones there. By the time we left, there were probably at least 30 people, along with a couple of dogs. There seemed to be an abnormally large amount of fishes down there, and that made me think about Pablo :-) I got to talk with a guy who lives on the Cherokee reservation, which I didn't know was just a few miles away. That was neat. One of his kids was jumping off the very highest ledges. After one such jump, he turned to me and said, "Every kid I raise is dumber than the last one." Oh man, it was hilarious. Anyway, it was nice. The water was so cool and clear. There is some place I have always wanted to go called the blue hole. It is supposedly not far from Kinlock. But I have never been given exact directions.

The rest of the weekend...
Kyle and I headed up to Nashville Friday after work. We first stopped off at Shane's to pick up some video gear. Well, Shane recently contracted viral meningitis. He must have gotten it when he and Angelina went to Africa to try and adopt a child. No, wait, that was Brad Pitt. Anyhow, I had it in my head that I would just stay in the car to avoid any virality. But when we pulled in the drive, there was a strange vehicle there. Kyle thought it might be Tammy. But I saw the Maryland sticker and knew exactly who it was. So there it was... meningitis versus hottie. Guess which one I chose.

After that, we met up with Cassie and hung out downtown for a few hours. Had dinner at Big River Brewery and shot pool at Buffalo Billiards. BB's has these big front windows which they leave open most of the time in the summer. They open out onto busy 2nd avenue, so you can see all the people walking by. We always try to get one of the front two tables, which we were able to do on this night. This is when the most exciting event of the night occurred. While I was shooting, I hear this loud crash and thud behind me. I turn around and see this 300 pound guy clamboring to his feet. He has either jumped or been pushed thru the window. There's a couch right next to the window, so he tumbled over that and onto the floor. What the freak!? He gets up and clambers back out the window. Shortly thereafter, someone comes and closes all the windows. Got home about 2:30.

Saturday, I worked until 2:00. Hung out with some friends Saturday night. Shot pool, watched TV, ate, and played NCAA Football 2006. Got home a little after 5 AM. What the freak?! I have no business being out that late. But it's nice to know I can still do it once in awhile... I guess. Sorry this hasn't been too creative, but I'm really exhausted. I think I'm seeing purple spots. Not sure if it's the meningitis or the sleep deprivation. Either way, now I must sleep. Hope you all had a good weekend.