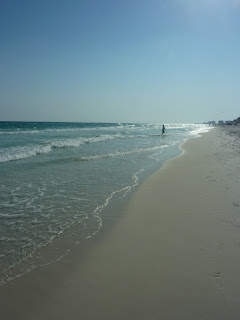 I'm back from my soul's vacation, my at-least-annual experiment in latitude reduction resulting in a slight, if mostly imperceptible, clearing of mind and refreshing of body. I have returned from my paradisical pilgrimage to the world's largest sandbox, where I enjoyed the never-ending symphony of Crashing Waves, an aging nature surf band -- it's an obscure genre.

In other words, I'm home from the beach.

This year's Destin getaway had a couple of marked differences from years past. In a cost-cutting measure suggested by my financial advisor, which is me, and concurred with by my travel agency, which is Yahoo Local, we stayed at a less-expensive place.

It was a quaint little motel with only four units and a gravel driveway. Surrounded on all sides by huge condos and three-and-four-story beach houses, it hearkened to an earlier time. A piece of old Destin preserved as it must have looked thirty years ago or more.

The owner has beach chairs and umbrellas that she lets you borrow. The rooms don't have phones -- not that everybody doesn't have a cell phone these days -- but each night, she sets a phone outside the office window for tenants to use. She's an older lady who seemed to appear out of nowhere at times, to recommend eating places and remind me to "Hon, make sure you rinse off the beach chairs when you're done using them, the sand is what causes them to rust." It was charming. Also, I made sure to rinse them off diligently from then on as I was a little terrified of getting in trouble. 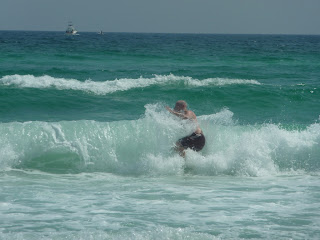 The other departure from the norm on this trip was that we took a stroll through Harborwalk Village on Saturday afternoon. I'd eaten there before, but much like my feminine side, had never really explored it at all.

This is where I discovered that one of the boats which docked there was named The Bone Collector! Really? They're collecting me? Do you think it's possible there are more me's out there? Phew, I'm blowing my own mind right now. It's all too overwhelming to think about. The Bone Collector was out of port while we were there, which is a shame for the owners, as I'm sure they would have loved to take a picture with me.

Oh, I also wrote a poem. Nothing inspires me like the beach. Just put me in the sand and wait for the magic to happen. It was a little tough as I wrote in my head while lying on the beach then had to try and remember it so I could type it into my Torch when I got back to the room. At the time, I was sure it was going to be my first published piece of poetry and that Jimmy Buffett was going to turn it into a song and I would never have to work again. But that must have been the immense heat affecting my brain. Because as I read over it now, I can't even bring myself to post it here. (And I once posted this!)

Otherwise, it was a pretty typical Destin trip. No schools of stingrays to run from. No heroic-in-my-own-mind underwater sunglasses rescue. Just a perfect, but all-too-brief escape to my favorite place in the world: the edge of the ocean. A place that feels even more like home than home some days.

The pull of the tide on my heart is strong. Each trip is never long enough. And it's always much too long until the next one. Maybe one day I won't have to come back. If that ever happens, you'll know that I am completely happy.

But you might want to check the hull of The Bone Collector. Just to be safe.