Music Monday: This time of year

It comes at first in bits and pieces.  Hinting at itself with a single crisp morning, only to be swallowed up by the heat of a midday Sun.  Then a week later, perhaps two, you get an entire day of it, the oppressive humidity removed and replaced by a feeling so familiar yet not fully describable, so that it can only be called "fall."

September seems to arrive on a gentle breeze.  At first it's just a breeze, stirring the still warm air.  But after some days, it begins to turn and to chill.  Soon here the cotton will be dried and full, ready for picking.  Then the leaves begin their spectacular but all-too-brief magic show, as the sun begins to set on the year.

For me, fall will always be a Friday afternoon in 1989.   It's high school, and a pep rally.  The students have long since mailed it in for the week, and most of the teachers have done the same.  It's intentionally accidentally bumping into the girl I've wanted to ask out since the first day of Physics after school, then not quite getting up the courage to.  But still smiling because I got to talk to her.  And besides, there would always be next week.

It's those few perfect days where no heat and no AC are needed.  It's driving with the windows down and singing at the top of my lungs to my "Unchained Melody" cassette single because Bill Medley and Bobby Hatfield knew just how I felt.

Fall is a reminder -- of itself, of other falls gone before, and of so many other things you hadn't even planned on remembering.  But damn that breeze and all it conjures up...

Taking advantage of the change in weather, we ventured down to the Clarkson Covered Bridge Sunday afternoon.  I have included some iPhone photos for your ocular delight.  The scenery is God's (and the Alabama Historical Commission's).  The captions are mine. 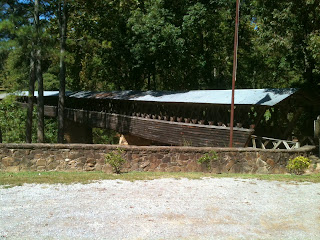 As covered bridges go, she seemed like a long one. 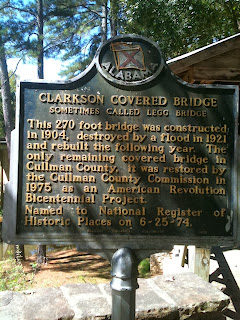 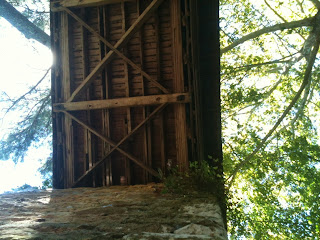 "I don't ever wanna feeeeeel, like I did that day.  Take me to the place I looooove..." 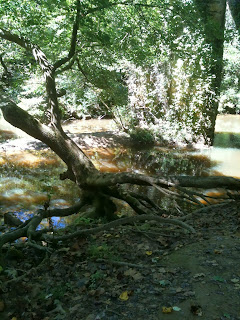 I like to call this one "Tree on Side of Hill, Hashtag Nature." 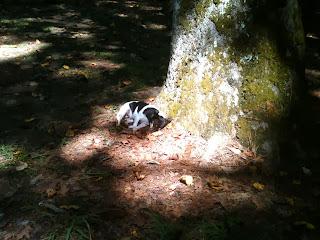 I did everything I could to save this dog, but as it turns out he actually was not dead in the first place.


And it being Monday and all, I know it's a little out-of-character for me to do a Music Monday.  But what the heck.  I haven't blogged in a month.  May as well throw everything I've got out there at once.

I had a couple of songs in mind.  One was "This Time of Year" by Better Than Ezra, but it's really hard to find decent live versions of songs and I couldn't find an official video for that one.  The other song isn't anything all that remarkable.  But it was written by a guy from my home county, and a couple of the people mentioned in the song are real people who do or did exist, and I'm pretty sure the gin is still there.  So in that sense, I guess it is pretty cool.  It's called "Sweet Southern Comfort."  And again for lack of a decent live version, this is the video for the song.  Try and ignore the cheesy phone call bit at the start.

Mr. Cy Berstocker thinks he has uncovered something quite alarming about the world in which we live.  After suffering through a two-hour-plus period of a workday during which none of his friends played a single move in Words With Friends, the Alabama man began to wonder what was happening.

"I've got forty-seven games of Words With Friends currently in progress," Berstocker confessed as he showed off his sparkling career 25.1 points-per-word average.  "Now, I could see twelve or fifteen of these people having plans or just getting sick of playing, and losing.  Maybe even twenty or thirty.  But every single one?  It didn't seem likely."

"I'd always heard of the rapture, and I figured this might be it.  I remember those books being out so I picked one up and started reading.  Well, I probably don't have to tell you, it was pretty boring.  So I only got to page four.  That's when I decided something even more disturbing might be going on."

His hypothesis?  People at work, were actually working!

"I know it seems unlikely, but that's all I can come up with.  Look at this.  Normally, by this time of day my battery power is down to twenty or thirty percent.  Today?  Seventy-eight percent.  Meanwhile, I've been nudging people left and right, like an extroverted goat.  It's like a Twilight Zone where the protagonist wakes up and goes to work.  He's still goofing off, but suddenly everyone else is doing actual work.  It's freaking me out, man."

For now, Berstocker mostly sits and stares at his iPhone, pondering things like whether he has enough chip clips for all his potato chips, and maybe someday interacting with another human face-to-face.

Pulling down and releasing the screen every few seconds to refresh.