The Jeep hit a milestone Thursday. And apparently, I thought no one would believe me if I just told them? Why else would I take a picture? 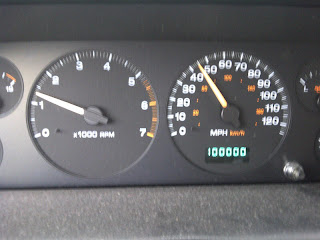 What? I had to slow down to take the picture. Because while texting and driving is now against the law in our increasingly totalitarianistic state, as far as I know taking pictures while driving is not.

One hundred thousand miles. Or by my rudimentary calculations, somewhere between $12,000 and $18,000 in gasoline. I started thinking what if gas were half the price it is now, how much money could be poured back into the economy. So let's say $7,000, multiplied by a guesstimated 200 million licensed drivers, where each abacus bead represents $100 billion dollars, carry the one, the total comes to roughly $1.4 trillion. Per one hundred thousand miles driven, of course.

Thursday was also my Dad's 61st birthday. I'm not sure how many miles that equates to, but fortunately Dad has always been pretty low maintenance.

Once again ignoring his requests for socks, I got him a gift card to one of his favorite restaurants and a fairly lame card. That's because I'm pretty sure the only decent card they had was the exact card I got him last year. And I looked in three different stores! The selection of greeting cards in this country is beyond atrocious.

We had a small gathering at my sister's. Dad was there, as you might imagine, since it was his birthday. But Nephew Bone was the star of the show, as he has been since making his debut almost three years ago. He has progressed from saying "Bama" to now saying "Amabama," which we unanimously agree is the cutest thing ever. Of course, I had to joke that Mom and Dad didn't think it was all that cute when my sister started saying "Amabama." Then again, she was nine.

After supper, Nephew Bone took me by the finger (unknowingly causing my heart to instantly melt), and led me back to the hayfield. He had me put him on top of a hay bale. Then my sister's dog, Pepper, jumped up on one, presumably to protect Nephew Bone? I dunno.

Anyway, there were eight or ten bales lined up with small enough spaces in between so that you could step from one to the next. Suddenly, Pepper started racing back and forth on top of them. She looked like a greyhound at the track. Well, Nephew Bone just thought this was the funniest thing ever. He nearly fell off the hay bale he was laughing so hard. I reached to steady him. He could barely stand. It was one of those can't-catch-his-breath laughs, and it was just perfect.

Mostly, the miles rush by in a blur, by the hundreds and thousands. But a few are worth slowing down for, if only to take a mental picture.

"Just sit right back and you'll hear a tale..."

Sherwood Schwartz passed away this week, to not a lot of fanfare. A simple mention on the CNN scroll and a blurb on Google news mentioning his two greatest accomplishments: that's exactly how I hope to go.

And while we could spend hours, yea, weeks debating what my two greatest accomplishments are, or even if "accomplishment" is the right word, for now let's stay focused.

Sherwood Schwartz. I never knew the man, but he created two of the iconic sitcoms of our time: Gilligan's Island and The Brady Bunch.

And while I was always more of a Gilligan man, what young American boy didn't have at least a tiny crush on Marcia Brady? Not to mention, the episode where Marcia's bracelet nearly knocks over the house of cards is still quite possibly the most tense moment in American sitcom history.

Neither show did great in the ratings and were mostly panned by critics. But there must have been something appealing about them, as both lived on for years in syndicated reruns. That's how I and so many in my generation were introduced to them growing up.

I used to know every single episode of Gilligan's Island. I remember one night between the ages of 12 and 15, my friend Archie and I must have discussed half of them while waiting outside the gymnasium/aquatic center for his parents to finish their square dancing class. It was ninety minutes of "Remember the one where..."

For some reason, I loved that show. I wanted to be on that island. The little huts, the lagoon, Mary Ann... What's not to love? And don't get me started on the professor, aka the original MacGyver.

I've always been drawn to shows with an attractive central setting. Some place better than where I am currently. Classic example: Mister Rogers and the neighborhood of make-believe.

Not that I'm slicing bread for the first time here or anything. I think most shows have that, sitcoms anyway. Maybe that's why I never liked Roseanne or MASH. I never desired to be in the Conner house. Or the Korean War.

I haven't seen reruns of The Brady Bunch or Gilligan's Island for years now. And that makes me a little sad. Sure they may have been a little corny. But you could do a lot worse than corny. There was a certain innocence to those shows that I'm not sure exists anymore. The passing of Sherwood Schwartz is a reminder of that.