This week's Thursdays With Bone has been moved to Friday. Also, due to the fact that I'm currently at the beach, it is a repost. I know, we're already into reruns after one week?

Anyway, this is a post about a place I love. And it's where I'll be until Sunday. Hopefully, BP won't be destroying it anytime soon.

On US Highway 98, just east of Destin, between Miramar and Santa Rosa, sits a little cafe called The Donut Hole. It's become tradition that on the day we leave the beach, we stop there for breakfast.I recommend the southwestern omelet. And the doughnuts, of course. I always get a box of doughnuts for the road. The food is great. The service sometimes lacking because it's so busy. But I've never been when there wasn't a line of people out the door and down the side of the building waiting.

There's a beachside restaurant called The Back Porch, with big bay windows to let in the ocean breeze, an outside bar, and picnic tables in the sand. I recommend the dreamsicle cake for dessert. And any and all of the seafood. You'll think they must have caught it that morning. And maybe they did.

There's an empty spot in the sand, just at the edge of the uprush, perfect for sitting. Where the water might wash over your feet once every five or six waves. Where you can bury your toes in the cool, damp sand, and think about anything and everything. Or nothing at all. And even though it's only a few hundred feet to the highway, it seems a million miles away.

I've got beach fever, if you can't tell. The highs have been between 60 and 70 here for seemingly the past week. I've been driving with the sunroof open, even at night. And last night before the storms moved in, it was warm and very windy, and reminded me of the ocean breeze.

So I've been listening to Buffett and thinking about the beach. The sand. The breeze. The waves. Gorgeous American girls working on their tans. All the while, me having no clue as to whether they are 16 or 29.

Last night, I opened the window so I could listen to it rain. Seemed like it rained for twelve hours.

That's another good thing about the beach. Even when it rains, it never seems to last very long.

In the interest of blogging more than once a fortnight, here I am again. I notice that my last two posts, and three of the last four, have come on a Thursday. That was not at all planned, but if you would like to believe that it was planned, feel free. Think of it sort of like Tuesdays With Morrie. Except on Thursdays. And with Bone. Also, much less enlightening.

Last Thursday, I was at a place that I daresay few of you have ever been, and most likely will never be. I went to see country supergroup The Oak Ridge Boys in concert.

Joe, Duane, Richard, and William Lee sang all your favorite Oaks' hits, such as American Made, Ya'll Come Back Saloon, Trying To Love Two Women (which one of them cracked was Tiger Woods' favorite song), and Ozark Mountain Jubilee. Any of these ringing a bell? What about Elvira? Yeah, you wish you'd gone now, don't you?

Here's a bit of Oak Ridge Boys history I found out during the show. The group was originally known as the Georgia Clodhoppers. In the 1940's, the Clodhoppers were brought in to the secret city of Oak Ridge to entertain the residents there who had been sequestered from the rest of civilization to work on the Manhattan Project. From there, they began calling themselves the Oak Ridge Quartet and later, as we know them today, the Oak Ridge Boys.

I also may or may not have got hit on during the show. The lady behind me supposedly "dropped" her phone and couldn't find the back to it. So I found it for her. Then she poked me on the shoulder and said she couldn't seem to put it back together. Please, could she have been more obvious? It's the 2010's, lady. Cars are parallel parking themselves. Who doesn't know how to reassemble their cell phone? Of course, she did look to be about seventy. Nevertheless, I fixed her phone. Rescuing damsels in distress: this is what I do.

Now I know some of you might be thinking that was the most exciting part of my weekend. (Yes, I'm including Thursday night in the weekend, just go with it.) Well, normally it would have been, by far. But not this time.

That's because on Saturday I got to pick up Nephew Bone and take him to the Spring Festival, Bluegrass Jamboree, and Antique Car, Tractor & Engine Show. All by myself.

It was our first uncle/nephew outing together, and he was so well-behaved. He especially seemed to enjoy the funnel cake. And he also got hit on by an older woman. A girl, who looked to be about eighteen, stopped him as we were walking between the giant slide and the bouncy thingy and said, "You are so cute." Like uncle, like nephew. Right, buddy? 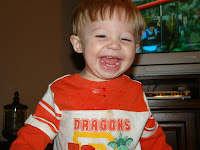 On the way home, I started singing songs I thought he knew. I sang Jesus Loves Me, and when I finished, I turned around and he was looking at me with this big smile on his face, like "I know that song, Uncle Bone!"

Then I started singing Itsy Bitsy Spider. About halfway through, I looked in the back seat again and Nephew Bone was looking out the window, his arms in the air, doing his hand motions for the rain and the sun and the spider.

If only you could box up moments.

(Yesterday was my 7th bloggiversary. I figured I couldn't truly claim to have made it the full seven years unless I did at least one more post. This is a recap of my trip to Cincinnati a couple of weekends ago.) 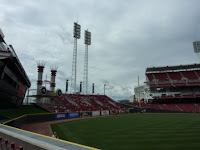 I think I was always meant to go to Cincinnati. I was raised to be a Reds fan. Well, I was raised to be a Bama fan and good southern boy first, but Mom also rooted for the Big Red Machine. (For my sports-challenged readers, the Big Red Machine is not some obscure Communist organization. It was the nickname of the Cincinnati Reds teams of the 1970's, who appeared in four World Series in the decade, winning two.) Once the Big Red Machine was dismantled, Mom could not have cared less how the Reds fared. So it has been my cross alone to bear, lo, these many years.

The most interesting thing on the drive up Friday evening was the point in the state of Kentucky where there is an adult video store on the right side of I-65 and a billboard with the words "Hell Is Real" on the left side. I made sure to keep it on the straight and narrow through there.

As I neared Ohio, an interesting geographical question began to formulate within my brain: When exactly does the South turn into the North? That was followed by other questions bubbling up, festering. At what latitude do people begin to speak faster and become difficult to understand? Do they serve sweet tea on this side of the Ohio and not on the other side? And just how many Union sympathizers have infiltrated Kentucky in the last century-and-a-half?

We actually stayed on the Kentucky side, in Covington, just to be safe. From the hotel, it was only a short bus ride or mile-and-a-half walk across the Ohio River to the stadium. The walk was either very pleasant or incredibly soggy, depending on the weather. 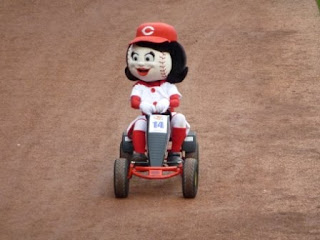 We wound up attending both the Saturday and Sunday games. The Reds lost the Saturday game, 5-0. On Sunday, the outlook was as dreary as the drizzly Ohio sky, as the home team fell behind 4-2. But a late-inning comeback produced a thrilling 5-4 victory. My fantasy team closer got the save. My fantasy team catcher had the game-winning RBI in the bottom of the 8th inning. And the guy my fantasy team is named after hit a homer. I was glad we had decided to go back.

One of the highlights of most any trip is the food. At the ballpark, we sampled a Skyline chili cheese coney and something called a Walking 3-Way, which is not nearly as difficult as it sounds. 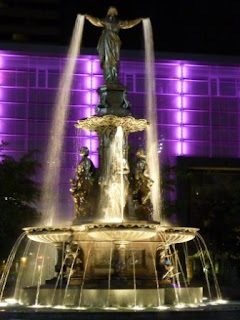 Saturday night, we went to Fountain Square, which is a simply gorgeous area downtown. I found out later -- by Wikipedia'ing, of course -- that the fountain can be seen in the opening credits of WKRP In Cincinnati. After reading that, I think it's fairly obvious that fate had led us there.

We had dinner outside at the Rock Bottom Brewery. There's just something about eating outdoors at little cafes and restaurants that I absolutely love. It reminds me of being in Europe, which is quite odd when you consider that I have never been to Europe.

Our last meal actually came at the suggestion of the desk clerk at the hotel. As we were checking out on Monday, she commented that she liked my shirt. I was wearing my "This Is How I Roll" Bama shirt. Turns out she was a Bama fan, so naturally we struck up a conversation. She knew her stuff, too! Refusing to call Auburn by name, she referred to it instead as "that school on the other side of the state." Talk about feeling at home.

Anyway, she recommended a place across the street called Riverfront Pizza for lunch. I tried their ranch pizza, which was pretty good. But the best part was that they had sweet tea! That's when I knew that the Yanks hadn't completely taken over Kentucky. 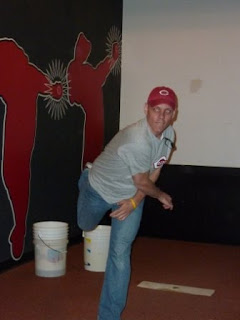 After I got home, I was telling Mom about going to the Reds Hall Of Fame following the game on Sunday.

"Did you see Johnny Bench or Pete Rose?"
"No, they weren't there."
"What about Morgan?" (That's apparently what my Mom calls Joe Morgan, which I wasn't aware of until that moment.)
"No. He wasn't there either."
But I was glad that she remembered them.

Overall, I loved Cincinnati. There are certain places that feel like home when I visit. They bring a sense of being completely comfortable and content. The beach is always like that. Nashville is like that sometimes. And walking into Great American Ballpark for the first time, there was a similar feeling. Seeing thousands of fellow Reds fans I thought, "Ah, these are my people."

Three or four different times random people on the street made comments about the Reds to me. Even though it's been thirty years since the Big Red Machine and twenty years since their last World Series title, it's still a baseball town.

"I walked half way from Louisville. Now there she lies at the foot of the hill. Shinin' like a jewel in the valley below, Cincinnati, Ohio. Cincinnati, where the river winds, 'cross the Mason and the Dixon line..."
Posted by Bone at 5/06/2010 06:02:00 PM 22 comments: