If you had told me two months ago that I could be even less productive than I already was, I'd have said you were crazy.  And not like in a joking, slap-you-on-the-back "Aw, you're crazy" sort of way.  But in a jumping-up-and-down-on-Oprah's-couch certifiable way.

I simply did not think it possible.

And then, I met my new best friend: the iPhone.

And now, huge chunks of my day are just gone, completely eaten up.

How much of my day?  To answer that question, I've prepared this helpful pie chart: 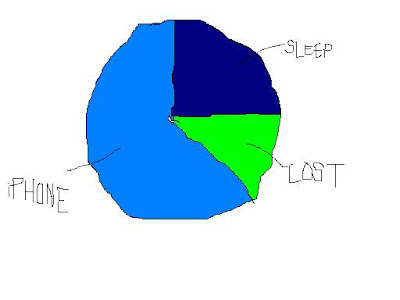 It's probably the best graph I've ever done.  It represents how I spend my non-working hours. (And if we're being completely honest, some of my working hours.) I think it's pretty self-explanatory. "Lost" represents those times during the day when I sit down and it's 3:15, then before I know it, it's 4:30 and I haven't really done anything at all, just kinda spaced out for awhile. Where did that time go? I don't know. But it happens quite often.

"Bone, you went a little overboard with the apps."

That statement was made to me by a seven-year-old, as he played with my new iPhone a few weeks ago.  By the way, the same kid also commented while listening to me yell at the TV as Alabama was dismantling Michigan on the opening weekend of college football, "I think you're a little obsessed with the TV.  Maybe you shouldn't watch TV tomorrow."  Out of the mouths of babes...

You know how those iPhone owners are always like, "If you ever try an iPhone, you'll never own anything else."   Like they're sooo special and in a completely higher class in the smartphone feudal system than the rest of us.

Well... they were right.

And now, I'm one of them.  I have been baptized into the cult.  And we're talking full immersion, not just sprinkling.  I have been given the name Tania!

We are a devoted sect.  A peculiar people, if you will, forever bound to our cellular messiah, Steven Paul Jobs.  We search the iTunes Store daily to see whether any of these apps be free.

As you may know, I didn't grow up in an iPhone family.  My parents raised me as a strict Nokia-ite.  But I felt there had to be something more out there.  Eventually I struck out on my own and after dabbling in several operating systems, I discovered the Blackberryists.  They suited my needs at the time.  But, lo, I had no idea what untold riches and glory did await my wretched soul in the Tabernacle of Apple.

After my Blackberry died back in July, for six days and six nights I wandered around in a cellular-less wilderness, with nothing but the manna of instant messaging to sustain my techno-starved soul.  Then, one glorious Tuesday afternoon, I experienced a road-to-Damascus-like miracle, as a customer-service-Moses at the AT&T store did shewest me the promised land.

That's right, dearly beloved.  I'm here to tell you there's something else: the Apple world.  It's a world of never-ending happiness, where you can always shop the iTunes store, day or night.  And they need no Kindle there, neither light of Nook, for the preponderance of apps doth taketh up their day.

Now I shalt go into all the virtual world, and preach the good news of the iPhone to every nation.  He that believeth and downloadeth (apps) shall enjoy eternal smartphone happiness.  He that believeth not shall be condemned to a life of frequent battery pulls, and possibly lots of unnecessary productivity.

And who would want that?

I would like to close today by paraphrasing a quote by the sage old bard, Thomas T. Hall: "Ain't but three things in this world that's worth a solitary dime: old dogs, children, and this iPhone of mine."

Now, if you'll excuse me, I must attend to my Tiny Tower.  It appears the Glass Studio on the 26th floor needs to be restocked.

A penthouse in Port Charles to a pineapple under the sea

News like that isn't shared lightly, but you know you have to.  I thought it better to get it over with quickly.

First, I texted LJ.  Yes, texted.  Because, well, if there was a chance either of us were going to become emotional, I didn't want it happening on the phone.  That would be the most uncomfortable moment in both of our lives.

"You see where Steve Burton is leaving GH?"

His reply was quick, pain-drenched, and expected: "Nooooooo! It's the first day of college football season and you had to go and ruin it." (Actually, he texted "football reason" instead of season, but as he only recently got his first-ever cell phone, I let it slide.)

Next, I texted Wolfgang.

I immediately unfriended him.  Not on Facebook, in real life.  I can't surround myself with such callous, uncaring energy.

And so, as August gave way to the first tinge of fall in the air, I was already feeling the cold, cruel winds of winter.  For the day I had feared, dreaded, and hoped I'd never live to see, had arrived: Steve Burton, the actor who has played Jason Morgan on General Hospital for the great majority of my post-pubescent life, was leaving the show.

For so long, Jason has been one of my heroes, right up there with Mike Seaver, Luke Duke, and obviously, the Karate Kid.  I can't count the times I've compared myself to Jason Morgan.  He was often the voice of reason in Port Charles.  Somewhat remarkable considering he's in the mob -- er, coffee importing business.  And now?  He's leaving.

How will I cope without one of my heroes?  By bottling my feelings up inside, of course, in true Jason Morgan fashion.  Also by following Steve Burton on Twitter.  I don't know that it helps.  (Yes, it does.)

By the way, all this occurred over Labor Day weekend.  And yes, I'm just now getting around to writing about it, in true Bone fashion.  Apparently, posting five times in August left me scribically exhausted.

So I played laser tag later that weekend.  What, I was clearly disillusioned.  I've been trying to figure out how to smoothly transition between topics, but there's just no connection between Jason Morgan and laser tag.

Or is there? (Duh duh duuuuuuuuh!)

It was my first time to ever play laser tag.  And how shall I put this?  Well... I was dominating the dojo.

Did I mention I was mostly facing children?  What?  Most of them had obviously played before!

Now I may have fudged on the rules a little.  They say "no running."  But I figured if things escalated to a physical confrontation I could take either of the three teenaged female game masters.  Or at least, outrun them.  And I did wind up shooting my own team members a few times, but thankfully that doesn't count against you.

At the end of the match, or battle, or recital, or whatever it's called, you push a little button on your electronic thingie and it tells you what your game name is so that you can find your score.

I finished 2nd!  And no, that wasn't out out of three.  There were actually thirteen of us playing, although I'm pretty sure a couple of the kids were too small to actually make their gun fire.

And suddenly, a new hero is born.

Well, we gotta do something, because Frisco Jones isn't walking through that door.