Tipped a canoe and rafting, too

Why, hello there. I don't know where to start. This is almost awkward. Feels like we went on a date three weeks ago and I'm just now getting around to calling.

So what's my excuse? I dunno, post-Blogust fatigue syndrome, maybe? Also, if work gets any more "fun" I'm pretty sure it will be in direct violation of the Geneva Convention. If it makes you feel any better, I've completely let my fantasy baseball team go, too.

But enough of that. If you're still here then I am going to assume there is hope for us. And so, I want to try and catch up on a couple of things I have taken part in over the past few weeks. Today I will recap my whitewater rafting trip on the Ocoee over Labor Day weekend.

This was my first time. And boy, it was quite a whirlwind. Took us about five hours, which was about an hour longer than it was supposed to take. And I remember at least seven or eight times I was pretty sure we were going in the wrong direction. I seriously began to wonder if we were going to make it.

And that was just the drive up.

Rafting itself was fun, if a bit of hard work. Our guide was quite demanding. I should have known something wasn't exactly right when we were getting in our raft and I saw the words "Hell's Dinghy" painted on the side.

Throughout the trip I kept noticing passengers in the other rafts (which, by the way, were passing us as our guide kept getting us stuck on rocks) didn't seem to be paddling half as much as we were. Others noticed it, too. I think I can best describe it as the Grizzly River Rampage meets hard labor camp. So you know, you get wet but you work for it.

Also as fate would have it, I wound up in the front of the raft, which according to our "guide" (so take this with a grain of salt) meant I was integral to helping steer the craft. All the paddlers on my side of the raft were supposed to pace themselves off of me.

Umm, is now the time to mention I tipped a canoe earlier this summer? 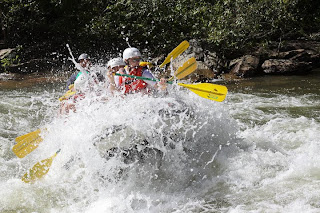 Our guide kept making fun of himself and at first I thought it was an attempt at self-deprecating humor. But in the end, I think he was just being honest. He wasn't very good. Then again, he got us to the end, no one fell out, and we all survived, which with me up front was probably no small accomplishment.

I was surprised at just how many rafts and rafting companies were running the river. In my mind, I had pictured it a bit more isolated, where maybe you pass another raft every four or five minutes. But it's nothing like that. There was a line of rafts waiting to enter the river, one right after another, and you were never out of sight of at least three other rafts. It was more like an amusement park, which I think could lure people into a false sense of safety.

In closing, any recapitulation of this trip would be unjust and incomplete without me mentioning the "changing room incident." We got back to the outpost (fancy word for rafting company headquarters) and one of the guides said there were rooms in the back where we could change.

So I went back to the car, got some dry clothes and went into the so-called changing room. I guess I was expecting it to be like Old Navy. You know, several tiny rooms, each with a door, a mirror, and a little bench. Unfortunately, it was not like that at all. There was just this big open room with three shower stalls. No other walls. No partitions. Nothing. I mean, I would have been better off changing behind a tree.

Well, I turned my back to the rest of the guys. There were only three or four of us in there at the time and I figured facing the wall was the best place to start. You know, it wouldn't have been so bad if I had been wearing underwear. I'm completely comfortable walking around in my underwear. But I was only wearing swim trunks, which have the sort of built-in underwear.

Anyway, for some unbeknownst reason, I decided to take a quick glance around. I dunno, I think maybe I was gonna check to see if the showers had curtains and I could change in there. Well that was quite possibly the biggest mistake of my life.

Anyway, other than the awkward changing room incident and the possible long-term effects thereof, the Ocoee trip was miles of fun. Literally. It was five miles of rafting. I'm thankful I got to experience whitewater rafting at its most commercial. And also thankful I didn't read this list of rafting accidents and fatalities in the state of Tennessee before the trip. Else I may never have gone.