The third Saturday in October.

To any football fan around these parts, that phrase means one thing: Alabama versus Tennessee.

To any non-football fan around these parts, it means you do not schedule your wedding on this day if you have any family or friends and would like for them to attend.  Actually, in some parts of Alabama, especially near my house, that last rule applies to any Saturday between the months of August and December.  But I suppose that's neither here nor yonder.  Also, no one was getting married Saturday.  I just threw that in as a helpful tip.

Axl and I decided to make the drive up to Knoxville to watch our beloved Crimson Tide (hopefully) roll over the Volunteers this past weekend.  Now, for those not familiar with Axl, here's everything you need to know: He self-tans, sings in a community chorus, and once lost the heel off his boot as we were leaving a Bama basketball game in some sort of real-life Mentos commercial gone horribly wrong.

(Hmm, I wonder if I should check with him before revealing the self-tanning thing?  Oh well, no time.)

He also has near-constant road rage.  So naturally, he drove.

Now I was a bit nervous about the trip, not because of Axl.  Well, not entirely because of Axl.  But because this was my first true trip into enemy territory.  I'd been to a couple of games at Vanderbilt, but that doesn't really count.  Football at Vanderbilt is kinda like going to a t-ball game.  It's fun.  You chat with your friends in the stands.  It's cute to see the kids out there missing the ball and falling down.  But no one really expects much.

But Tennessee?  That's a whole different story.  It's the definition of a rivalry.  It's Roll Tide versus Rocky Top.  The Bear versus General Neyland.  A vibrant, gorgeous sea of crimson clashing against that hideous, nausea-inducing orange.  We may have been on the same side in the Civil War.  But not since.

However, I must say all the Tennessee fans I encountered were as friendly as could be expected.  A couple of them were so nice, in fact, it makes me almost feel bad about the nausea comment.  Almost.

It also helped that the crowd was probably 40 to 45% Bama fans.  (Yes, I can guesstimate within five percent.  It's one of my many useless talents.)  I had a crimson-clad compadre sitting next to me and two more directly behind me.  Every time I would start to high-five the blonde sitting behind me, she'd full-frontal hug me instead.  And far be it from me to infringe on other fans' rights to celebrate touchdowns however they so choose.

The football stadium sits on the bank of the Tennessee River.  And while the stadium itself is a bit of a rathole and looks like it may not have been renovated since the Nixon administration, the area around it is quite scenic.  The World's Fair Park is a pretty area right near the stadium, as well. The World's Fair was held in Knoxville in 1982.

(FYI, it's taken every ounce of what little self-restraint I have not to refer to it as Knox-vegas this entire post.  You're welcome.)

Something else you need to be warned of should you ever attend a Tennessee Vol game:  You will hear "Rocky Top" roughly 127 times.  Before the game, during the game, after the game.  Even when there are 30 seconds left in the game and your team is annihilating Tennessee 44 to 13, the band will strike it up.  They have ruined what truly was one of the most venerable bluegrass songs of all-time.  Some sporadic eardrum bleeding is normal.

As the final few minutes wound down in the game, most of the Tennessee fans had long since passed through the exits, leaving the stands covered in crimson.  Such a sweet sight.

There's always a kinship one experiences when one encounters other Bama fans.  I would guess that is true for fans of most sports teams.  But when you're in enemy territory, that bond feels ten times stronger.  It was neat to experience that for the first time.

The drive home was magnificent.  Fall had come to Chattanooga.  I've always thought it a picturesque city anyway, such immediate and drastic contrast between the bluffs and rock faces of Lookout Mountain and the river meandering through the city below. The colors just amplified its, uh, picturesque-ness.

At one point on the trip, Axl and I found ourselves singing along in our best falsettos to Gloria Gaynor's "I Will Survive."  Which may seem odd to some.  Or, most.  I've forgotten my point.  Oh yes, I remember now.  It was good to have a testosterone-filled guys weekend away.

I suppose there are more stories I could share from Road Trip: Knoxville.  There was the Tennessee fan in front of us who I dubbed "Eighty Proof," because he was openly drinking his Crown from the bottle.  (Alcohol is "not allowed" in SEC stadiums.)  There was Axl and I arguing like an old married couple over the thermostat in our hotel room.  He sleeps with it on 50!  Fif. Tee!  And there was the waitress at the Waffle House who seemed to have no qualms showing us her chest tattoo -- both halves.

But you know what they say: What happens in Knox-veg... Well, you know.

Music Monday: All those pretty people 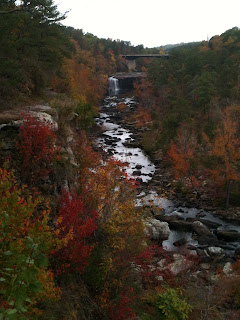 Fall always seems to arrive in an instant.  Even though I know by the calendar it has to be near, that first chill of the season still catches me a bit by surprise.  But it's a good surprise, like an unexpected visit from a cherished old friend.  It leaves me smiling.

For the first time in several years, or so it seems, we've actually had about three solid weeks of what I would consider fall weather.  Temps mostly in the 70's during the day and 40's or 50's at night.  We decided to take in some of the fall colors this weekend, knowing the leaves won't be much longer.

At one of the scenic overlooks, someone spotted a couple of hawks across the valley.  Watching intently, I soon noticed a few others.  And then, even more.  At one point, I counted more than twenty of the majestic creatures circling overhead.

As they glided effortlessly and without a sound, I stood and watched for several minutes, feeling small, and in complete awe.

Getting closer to nature and a little father from everything else always serves to ground me a bit.  And I'm left to wonder why I don't do it more often...

For some unbeknownst reason, I had this particular song stuck in my head the whole day, to the apparent dismay of some in my party. (I'm amazed at how effortlessly I can sometimes conjure up dismay.  It's a gift, really.)  Anyhow, Kenny Chesney recently brought this song into the pop-country mainstream.  But I'm kinda partial to Charlie Robison's original version.  It's a little grittier.

So what are you listening to lately?