Forty is the new seventy 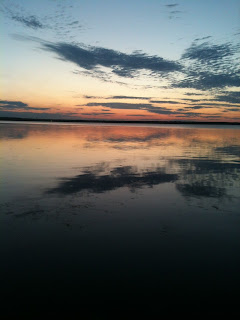 The first, I was leaping from rocks, flying through the air with the grace of a young Greg Louganis, the first time his mother threw him into the pool and told him to swim or die.  (What?  It obviously worked out OK.)

The second was much more sinister, much more sobering.  It is the second I want to focus on today.

I had just woken up from my second nap of the day.  It was a hard nap, where you wake up feeling like someone must have walloped you in the face with an iron skillet.  So I was admittedly a bit groggy as I made my way down the pier to the mini-catamaran of which I've become so fond.

There is a 3-to-4-foot step from the edge of the pier to the watercraft.  I've made it several times with no problem.  But on this day, something went horribly wrong.

A misstep, or a slip, or maybe someone pulled the watercraft slightly away at the last second.  We may never know for certain.  But in an instant, I was in the water.

My life flashed.  This couldn't be the real end, could it?  I mean, I had so much left to do.  I still haven't gotten to experience my full-on mid-life crisis!  That was undoubtedly going to spawn some killer blog entries, not to mention some great prescription meds!

Clinging to the edge of the vessel for dear life, I began to take inventory of my faculties.  Silently, I cursed myself for so foolishly throwing away all those Scooter Store mail-outs.

So many questions ran through my head. Who would take care of me?  Could I still play Words With Friends?   What was my last Facebook status?  The latter is important because whenever someone dies tragically the news story always includes the line, "He had just posted on Facebook two days ago.... blah blah blah."

(If you're curious, my last Facebook status would have been: "Had a conversation with the neighbor earlier this evening about gout.  I think I may need to scale back.  My life is getting a little too exciting."  OK, so that actually works quite well as a final post.)

Oh, and was I injured?  Yes, yes, there was definite pain emanating from my left hand.  I looked at my hand, one of only two that I have, and there I saw it:  blood.

Becoming more aware of my surroundings, I began to hear cries of "Bone!  Bone!  Are you OK???"

I pondered my next move.

Should I boost myself up onto the pier, get up and pretend everything is fine?  Um hello?  Do you think you're watching some movie right now?   I'm not Rambo, or the Bionic Guy.  Also, did I mention I was bleeding???

Plus, if I hop right up it becomes a funny story, with everybody laughing at Bone.  Been there, done that.  If I'm injured, it becomes a sad story.  All I wanted was three or four days of pity, to be waited on hand and foot, and to be regarded by some as a hero.  Is that too much to ask?

Summoning strength uncommon for a person in my situation (and age), I crawled up on the pier and laid on my back, as someone who had just been saved from drowning might be expected to do.  Then waited for someone to come administer first aid.

My feet were hurting.  More specifically, my big toes.  They must have taken the brunt of the force from my one hundred and ninety-, er, eighty-five pounds.

They would wind up purple and blue.  And I'm pretty sure my left big toe is broken.  I must have really banged myself up on the underpinnings of the pier because at one point, I was bleeding out of five different portals of my body.  But those bruises are nothing compared to the deep-tissue contusion suffered by my pride.  For that, my friends, like so many of my emotional scars, will never heal.

How did this happen to me???  I'm Bone!  I once scored 26 points in a church league basketball game!  I keep telling myself 39-year-old me never would have fallen.  But 40-year-old me.... well, apparently he needs to get together a rudimentary last will and testament.

As you might expect, I look at life a little differently these days.  You young whippersnappers who want to go the speed limit, you go right ahead.  I'll be in my over-sized (read: safe) vehicle, cruising into the September of my life at no faster than 35 miles per hour.  In the left-hand lane.  With a perpetual turn signal on.

When you see me, I likely will have just come from the Walgreens where I purchased some hand-grips and no-slip shower mats for the bathroom.

At my age, you can't be too careful.